Guide: How to be a badass. Figher: Gunship. Game version 0.8

Many new players want to kick butts right from the start and score a lot of kills. This guide will show you how to achieve such goal in a most efficient way.

Our purpose - be a badass.

Stabilized railguns - they exceed any weapon on this tier because of:

-Antimatter shells : they are effective against shields and enemies, who have a high kinetic resist. For example: guard frigate with phase shield.

-Try to shoot from your optimal distance , which is 3-3,5 km. You’ll have superior firepower because of crit. attacks and other weapons won’t be able to reach you right away(they have shorter optimal).

-Do not attack large group of enemies if combat reboot and engine overcharge modules are on cooldown.

-At first launch slowing field missile and after it - cruise missile. Wait one-two seconds before cruise missile launch, it will give you the guarantee, that your target won’t destroy cruise missile or hide between cover.

-Use slowing field missile before you close up with enemy, especially in capture the beacon and detonation modes. Remember, flying range of slowing field missile is 5.3 km , i.e. if you are in a 3 km range near beacon or bomb, don’t hesitate to launch the missile, enemies will be slowed down on their way and it will give you huge advantage.

-When you fight with interceptor, try to hold 2-2,5 km distance to it.

Good luck and have fun.

Thx for this great info,Help me alot to learn how to fit railguns, for T3 the best ship is the Wolf-M?

Thx again and sorry for my bad english not is my nature lenguage.

This is my Kalah. I just dont see how railguns can out-dps this. It has 78% crit with my module on, and then the 50% bonus crit dmg. I literally toast people in 2-3 seconds, taking on 2-3 peoplle coming after me at a time.

I see you have a long list of experience. Would just like you to examine the 2 different options and give an opinon. 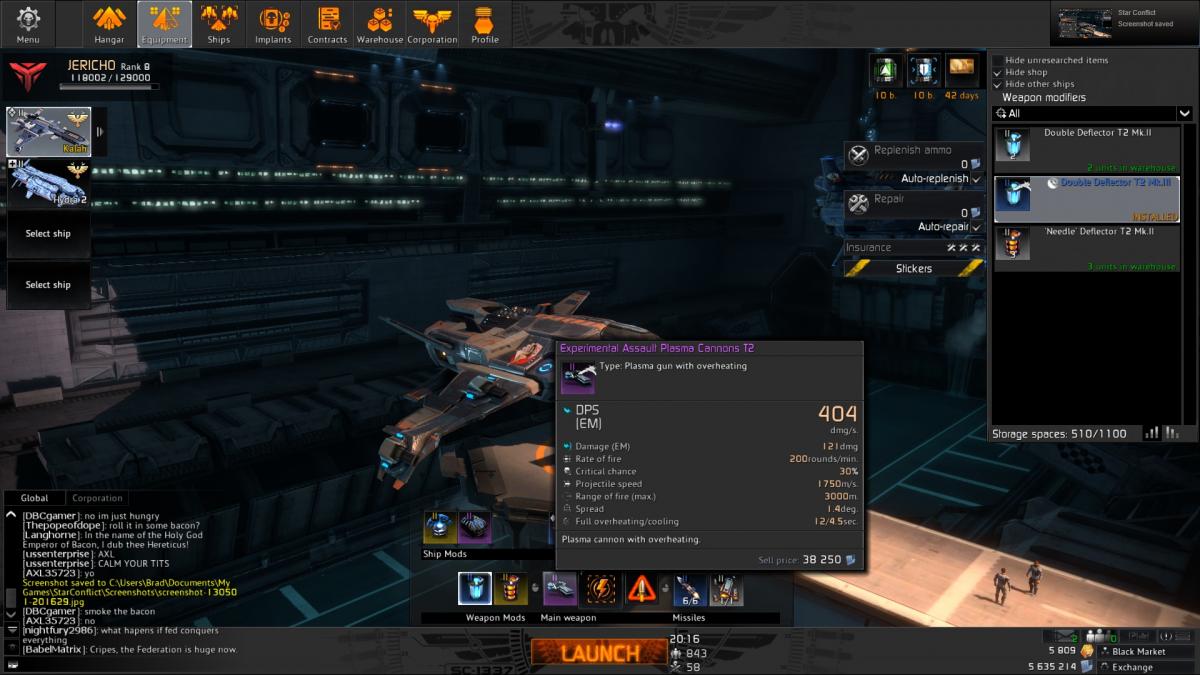 well, the projectile speed is horrible and you have to be rather close with with assault plasma( i myself prefer the hail anyway).

But isnt the point of a gunship to get in close and personal anyway, guess thats y projectile speed never really mattered.

In t3 where I don’t have an epic assault plasma, I usually run rapid-fire plasma and get behind their frigates after the main line engages.

I did try this guys build though, and in T2 it works pretty decent.

Not if your optimal range is 3-5k and you can use your agility to maintain that.  I like the rails a lot as well, even in close.  I don’t fly the Kalah, deimos 2 is my ship.  My rails have a 2% higher crit rate than plasma.  The extra range helps a lot…a lot.  What passives do you run? aircraft?

1 green spread reduction and 1 +33 EM shield resist, with my shield regen at 127/s. Even though its empire, shield regen saves your life many more times than ya think. Once my shield goes down, I pop Nano COmposite which boostsm y hull resist by 72 for 8 seconds while I try and get away.

This is my Kalah. I just dont see how railguns can out-dps this. It has 78% crit with my module on, and then the 50% bonus crit dmg. I literally toast people in 2-3 seconds, taking on 2-3 peoplle coming after me at a time.

I see you have a long list of experience. Would just like you to examine the 2 different options and give an opinon.

I thought the max rate of fire was 300, so using that gun on your gunship is limiting your overcharge, which I guess doesn’t really matter since that thing is a frigging beast all the time anyways though :/.

Yeah if you run rapid-fire you only gain 20.

I’ve been using the rails in T2 and going 20 kills a match with maybe no or 1 deaths. Pretty awesome.

I would like this guys input on tier 3. I have the Strong jericho command ship and my gunship is a Nukem.

Oh man what a dumb comment of mine, didn’t realize that thing wasn’t the rapid fire.

I have such a hard time using the regular assaults it just slipped my mind when I saw plasma and the high as hell DPS. Man the Kahal is so good, I wish the Neuron actually had something useful about it, but the frigging thing doesn’t even have a range increase like the basic Machete S.

Well, it works. Feel free to subscribe. This is the first video but I am working on my editing and recording skills to start producing more.

Those near covert ops levels of base crit chance, it’s awesome to see the damage.

I really think if I’m gonna pop for the 20$ steam package the first thing on my list is gonna be the Kahal follow by the Crus Type Q since you can’t get a rank 7 Jericho Guard any other way, as I said before I -really- really wish the Neuron had something special about it, but all it is is a half assed copy of the fed tacklers given Command form without the mods or sweet xxxx benefits riding on them like the Rhi No fed tier 2 premium.

Anyone know someone with a Rhi No? If you could ask them what kind of damage they normally see with a target painted while using the rails I’d love to hear a few numbers.

My T4 gunship has assault rails with wicked projectile speed and range, its like you dont even have to aim.

Thank you for reading my guide. this is strange, i see you in games although i’m in france :’)

Can I just express my disappointment at this guide being posted?

Since the posting, I’ve seen a massive influx of exactly this sort of build in T2 games. It is frustrating as hell - not because of the kill-potential (which admittedly is quite high), but because this is evolving into the modern-day lrf-camper. Have these people on the team, what are you likely to see? Yeah, they’re in the middle of a sector, just finding random things to kill. End of match? Few assists, 0 captures. Recon match? Again, middle of sector. Not going for the enemy captain, not actually defending own captain, just dogfighting brainlessly. yeah, I know, recon does factor killcount if both captains live. That’s a big IF, though, and either defending your own or killing the other captain *should* be the priority, with falling back to 10-minutes-of-killcount-grind being a last resort…

Essentially, what bugs me is that this build seems to encourage the ‘screw objectives, imma lone wolf this xxxx’ mentality, which is… detrimental. And sends the wrong message to new players looking to learn the game. “Oh, this player scored the most, i’ll watch them when I next fight with them. What did they do? Oh, they just f***** around paying no attention to objectives? Kk cool imma do that too!”.

Granted, some of the folks using this build are actually going for objectives too. Hats off to them. Just like some frigate snipers go for beacons. Given the chances though, which are you likely to encouter? … Yeah.