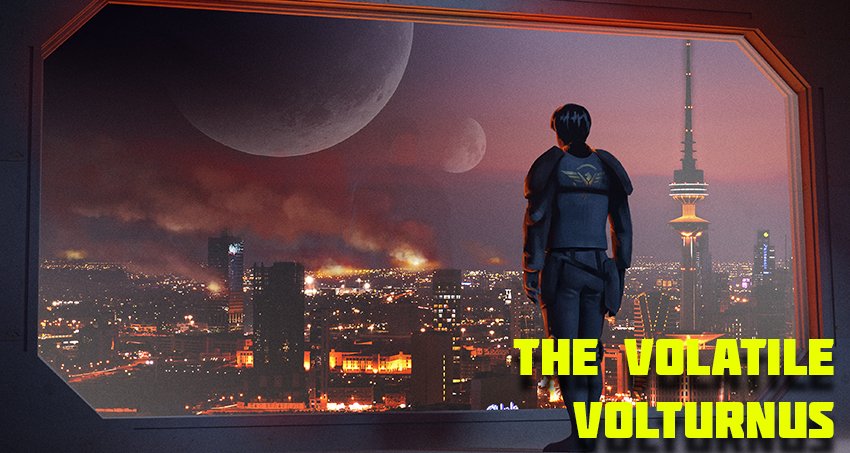 The fire of war was blazing, devouring the planet. Few people know how it all started, but even they don’t know the most important thing. The Emperor’s ambassadors arrived at Volturnus in the year 3632. It was proposed to join the Empire with full rights, the only condition being the recognition of the Emperor as the supreme authority. The hierophant had a difficult decision to make: he didn’t want to lose power, but it would be futile to resist either. With bitterness in his heart, the Lord of the five star systems went to meet with the ambassadors. “To whom do I entrust my flock? Will the Emperor take care of them?” the Hierophant thought, as he prepared for the meeting. He felt weak, but continued on his way.

The High Priest entered a hall lavishly lit by the glow of Not, the mother star of this system, with a patterned floor in the shape of a cross. In the middle of this huge room there was a carved mahogany table. The plasma stained glass windows flashed pleasantly, slowly changing their images. Two archbishops were following the hierophant. He sat at the head of the table, with his companions at his sides, and together they waited for the ambassadors, who arrived a few minutes later, accompanied by two dozen bodyguards. When the guests sat down, the High Priest began his speech:

— You say the Empire is ready to take my flock under its powerful wing. The Emperor will impose new taxes on the worlds of the East and will recruit new conscripts here. If necessary, he will use us as a foothold for offensive attacks or further space colonization. But the East cannot fail to recognise that only as a part of the Empire will we be safe from the raids of Jericho and the poison of Humanity, known to all as the Revenants.

The hierophant heard a rustling noise to his left, but paid no attention to it, trying to maintain his losing concentration, and after a considerable pause, he continued:

— After considering the pros and cons, I have made a decision: I accept…

The hierophant’s powerful voice was interrupted: the archbishop jumped up sharply, clamping his hand over the High Priest’s mouth and aiming a plasma pistol at his temple.

Two dozen weapons were pointed at all representatives of the East in the hall.
— Leave. We refuse the offer. You have one hour to leave the planet, — the archbishop demanded.

The bodyguards quickly led the ambassadors out of the palace and soon returned to Earth.
Just as the hall door closed, the archbishop pulled the trigger. His colleague smiled slightly.

The Emperor’s decision was swift: to bring the worlds of the East back into the realm of humanity, even if it means using force.

Two days later, the Fifth Squadron of the Invincible Legion arrived in the system and established a blockade. Now there was no communication between the planets, but the inhabitants of the capital did not yet know what awaited them.

The Emperor’s orders were explicit: to take control of as many worlds as possible without a fight, so not a single shell was dropped on cities that surrendered without resistance. The capital of the Eastern worlds was the one that stood for the longest time. The city government was offered to surrender for the last time, in response to which missiles flew towards the Legion ships. The capital was well protected from the air, so the troops had to be airborne a hundred kilometers from the city. The Legion advanced towards the capital with infantry and heavy vehicles, destroying all enemies in its path. And so, right now, they are on the outskirts of the city, near the former palace of the Hierophant.

The relentless sunlight was returning to the trenches. Mikhail sighed heavily, carefully lifted his head from the trench and looked around at what used to be Hierophant’s beautiful garden.

Mikhail looked through his electronic binoculars and noticed a flicker of sparks on the horizon.

The captain gave his order just in time: a few seconds later everything around him was engulfed in flames; the heat stung his back, and even his closed eyes were blinded by the bright flash. After a dozen seconds, Mikhail has started to slowly regain his eyesight. He looked around and was horrified by the sight: of all the defenders in his trench there was only one platoon of his company left, heavily battered but still able to fight.

Every hour was consuming more of their energy, and even though the remnants of the Eastern Guard were still well armed, fighting the Legion was brutally difficult. All the defence hope rested on a well-disguised secret artillery installation, covered by the last remaining planetary defence forces.

Mikhail’s thoughts finally came together. In the middle and by the end of the XX century, people hoped that everyone would have a peaceful future. How wrong they were! Weapons, technology, the state system have changed, medicine has evolved, clones have been created, but the trenches are still there. The same ancient tool, a shovel, was used to dig them out, and bags of sand and soil were used to reinforce the outposts. People haven’t changed as well. No matter what spacesuit they put you in, no matter what kind of machine gun they give you — plasma or firearm — you can’t take away the essence of human beings. A resting fighter is having a nap now, ignoring the clatter of shells, and on Mikhail’s left the guys who had just almost died are now laughing.

A guided missile, which for some reason the Colonel of the Guard called “Redpole”, flew deep into their territory, breaking the captain from his thoughts. So, it’s time. Whatever the orders, it’s time to use that howitzer or it will be captured by the Legion. Mikhail will only have time for one shot, and then they will be burned by the imperial troops.

“Load the launcher,” Mikhail said in a half whisper, switching off the helmet’s comms to avoid the imperial troops possibly listening in on their conversations. There was silence: everyone knew what they were getting into. The minute it took to get the howitzer into combat mode seemed like an hour to Mikhail. Two dozen eyes drilled the lieutenant with their grim eyes.

Finally, they threw down a camouflage net from a small hill, revealing an artillery unit that was insane in its parameters: the huge 500mm muzzle was terrifying, and the projectile range made it a truly terrifying weapon.

The clatter of the shells made their ears ring and the people standing at the post scattered in different directions. The captain shouted for everyone to return to their trenches, in the hope that at least someone would survive the retaliation. For a few minutes a silence hung around, and then a flash of fire covered everything. Losing his consciousness, Mikhail whispered: “Volturnus…”

The bright light hit his eyes. When is it going to end? Is this the afterlife? Then why is Mikhail able to feel his own body? Thoughts went slowly, but gradually everything came to a conclusion that he was… alive! Mikhail was very surprised and tried to stand up — the attempt was successful. He struggled with moving his legs. Mikhail examined the room in which he found himself: it resembled a room of a medical center. A few seconds later, the door opened, and a young woman in a white robe entered the room — the essential attribute of a medical worker. After a few seconds, she gathered her thoughts and started speaking:

— Hello, patient! You are in the capital medical center. We suggest you finish the treatment. If you stay on bed rest, you will be discharged in a week. If you need anything, you can always ask for it via the intercom.

— Thank you! I’d like to know the latest news, is it possible?

— Yes, here you go — the bed has a built-in base terminal that you can use. You may also have a visitor from the Legion coming to see you soon. Try to be polite to him.

Mikhail started browsing through the news: judging by the date, he had been unconscious for almost a month. Three weeks ago, the Legion suppressed the last forces of resistance on Volturnus. A powerful explosion disrupted their plans and delayed the imperial troops for almost a day. Now the interrogation must be expected — Mikhail had no doubt that it would be an interrogation.

When the man entered the room, the captain of the defeated Volturnus Guard was ready. The face of the Legion’s representative was calm, but the signs of anger were visible in his eyes. Nevertheless, maintaining a seeming indifference, he said:

— Hello, Mikhail Thunder. During the battle you selflessly defended Volturnus from our forces. The effectiveness of your company was recognized by the General of the Legion. Despite the fact that you were our enemy, you were given the great honor of being invited to join the Legion.

The city was shimmering with light. The scars of war were slowly healing: where yesterday there were barricades, today a building rises again. On the site of Hierophant’s palace there was a well-kept garden. Mikhail stood by the full-length window and observed his hometown. It was hard to find out that the archbishops had killed Hierophant, and during the assault on the capital they even tried to escape. Traitors were taken down by their own anti-aircraft guns. Mikhail went over in his mind how life on the planet had changed: a monument had been erected to Hierophant as a man who tried to prevent war, worlds had been incorporated into the Empire, several new stations had been built in the Not system - but the very essence of the people of the East had remained the same.

— Commander, the colonel is calling for you!

Mikhail slowly turned around, once again paying attention to the logo of the Legion on the shoulder straps, and went to the elevator. And at the time he did not yet know that his name would become sacred to the rebels who would afterwards call themselves the Federation.